Coach Keith McClenny, a native of Daytona Beach, Florida, graduated from Mainland Senior High School. From there, he matriculated to Barber-Scotia College where he earned a Bachelors of Arts Degree in Recreation Management. While matriculating at Barber-Scotia College, he was recruited by the basketball program, securing four different championships nationally and regionally. Inspired by his degree to promote physical fitness for children and teenagers, he sought a position with the YMCA in Concorde, North Carolina as Director of Sports Recreation.

From there, motivated by a desire to return home, Coach McClenny sought a position with the Volusia/Flagler YMCA as a Branch Manager. Hesimultaneously began a coaching career with Father Lopez High School, a private Catholic School in Daytona Beach, Florida. While coaching at Father Lopez High School, he helped guide the Green Wave to Several District Championships, Elite Eight Appearances, and Sweet Sixteen Showings. During his time of working with youth in Daytona Beach, Coach McClenny recognized that student-athletes were not receiving the coaching and mentoring they needed to successfully match their ability with their role on a basketball team. Coach McClenny developed Skill vs. Role, a program for aspiring, motivated student-athletes between the ages of six to 17 to successfully match their ability with their role. He noticed that these problems riddled the college basketball environment and was inspired to bring the same passion to his work with college students. Coach McClenny began helping one aspiring student-athlete develop their basketball and academic skills to be competitive at the college level and witnessed significant improvement in this student-athlete’s success academically and physically. He created the Red Devils Basketball Academy, Inc. Post Graduate Program in 2009 to address this gap to ensure that this impact was great. Whereas Coach McClenny has been employed with the Volusia/Flagler YMCA since 2000, Coach McClenny brings a wealth of knowledge and dedicated passion and commitment to the Red Devils Basketball Program Skill vs. Role and the Post Graduate Program. 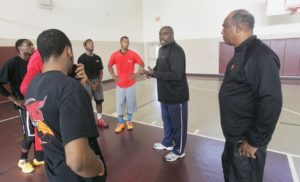